Approximately 5,000 new cases of cholangiocarcinoma are diagnosed in the United States annually, representing about 3% of all gastrointestinal tumors.

Surgery offers the only potential curable therapy for patients with intrahepatic cholangiocarcinoma, resulting in 5-year survival rates of 15% to 40%.3 For patients with advanced cholangiocarcinoma not amenable to locoregional therapy or surgery, treatment options are limited. Systemic chemotherapy for intrahepatic cholangiocarcinoma typically consists of gemcitabine and cisplatin, resulting in a median overall survival of 11 to 12 months.4 This limited survival, and the historic lack of effective treatment options following disease progression, highlight the need for more effective therapies.

In cholangiocarcinoma a variety of targetable alterations with oncogenic potential (including mutations, amplification, and fusions) have been identified in genes regulating cell growth, apoptosis, and metastasis, including fibroblast growth factor receptor (FGFR).5 Sequencing studies indicate that 30% to 40% of patients with intrahepatic cholangiocarcinoma have potentially targetable mutations, which vary according to tumor subtype: alterations in FGFR2, IDH1/2, BRAF, and c-MET are more common in intrahepatic cholangiocarcinoma while changes in KRAS, TP53, and CDKN2A/B occur more often in extrahepatic tumors.6 Mutation profiling may therefore identify specific genetic alterations reflecting disease subsets with distinct prognostic and therapeutic implications. According to Milind Javle, MD, Professor, Department of GI Medical Oncology at The University of Texas MD Anderson Cancer Center in Houston, all patients with cholangiocarcinoma who have a core biopsy or surgical resection should be considered for next-generation sequencing.

All patients with cholangiocarcinoma who have a core biopsy or surgical resection should be considered for next-generation sequencing.Milind Javle, MD

FGFR Biology and Alterations in Cholangiocarcinoma

The FGFR family of transmembrane receptors is comprised of multiple members (FGFR1-5) that bind over 20 different ligands. Binding to FGFR results in receptor dimerization and kinase activation, triggering FGFR2 to phosphorylate downstream signaling cascades (eg, RAS/RAF/MEK, JAK/STAT, PI3K/AKT pathways) that promote cell growth, differentiation, survival, and angiogenesis. Various FGFR genetic alterations in cholangiocarcinoma, including amplification, translocations (fusions), missense mutations in coding regions, alterations in noncoding domains, and epigenetic modifications, can result in ligand-independent dimerization and constitutive activation of this receptor.7FGFR alterations, creating oncogenic fusion proteins, occur in up to 20% of patients with intrahepatic cholangiocarcinoma. The majority of these involve FGFR2 fusions, and the presence of such alterations may predict tumor sensitivity to FGFR inhibitors.8 FGFR mutations appear to represent a subset of patients with intrahepatic cholangiocarcinoma who have a more indolent disease course compared with those having other genetic alterations or wild-type tumors. The incidence of FGFR alterations in intrahepatic cholangiocarcinoma and their likely role in driving tumor growth suggest that this receptor could serve as a therapeutic target.

Table 1: Baseline Demographics and Clinical Characteristics in Cholangiocarcinoma Patients With and Without FGFR Genetic Abnormalities9 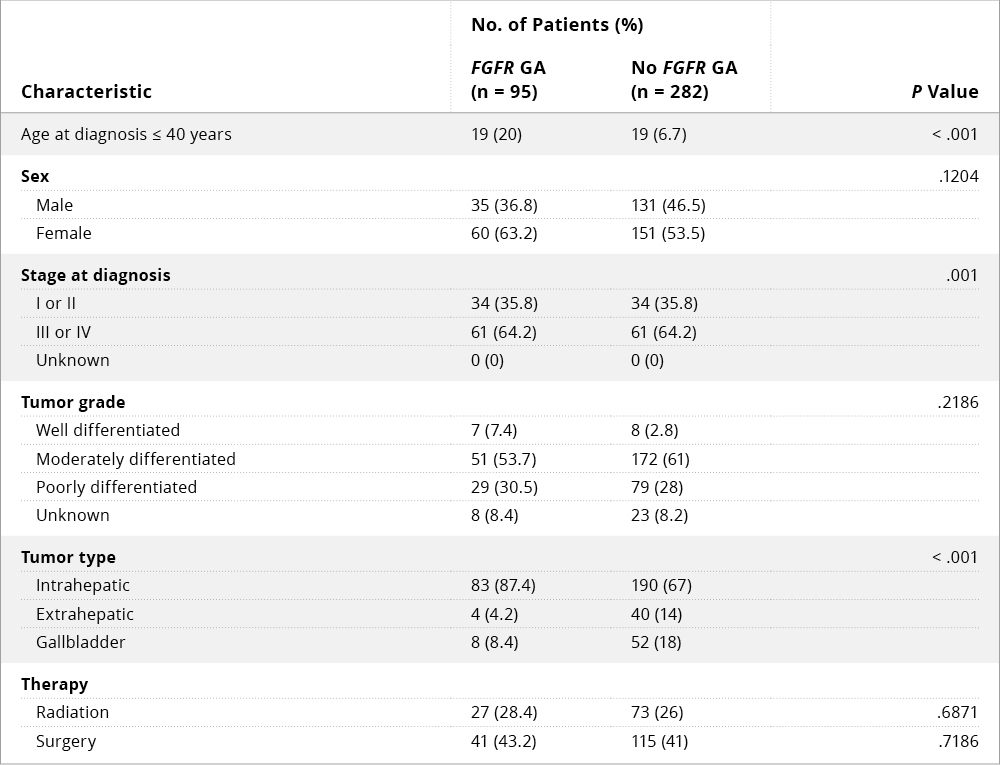 Jain and colleagues conducted a retrospective analysis of cholangiocarcinoma data from four U.S. cancer centers to identify prognostic factors and assess the survival benefit associated with FGFR inhibitor therapy. Of 377 patients analyzed, 25% had FGFR genetic aberrations (GAs); the most common of these involved FGFR2 (78%).9 FGFR GAs were found to be more common in younger patients (≤ 40 years of age), women, and those with advanced disease, and the majority of patients with FGFR GAs had intrahepatic cholangiocarcinoma (87%) (Table 1). FGFR GAs were also associated with more indolent disease and better overall survival compared with those lacking FGFR GAs (Figure 1A). Multivariate analysis indicated that FGFR-directed therapy, surgery, and radiation therapy correlated with improved overall survival, whereas coexisting TP53 mutation was associated with worse survival (Figure 1B). Notably, FGFR-directed therapy significantly improved overall survival compared with standard chemotherapy. The authors suggested that cholangiocarcinoma bearing FGFR GAs may constitute a distinct clinical phenotype that could warrant an individualized management strategy.

Figure 1A: Kaplan-Meier Estimated Overall Survival for Patients with Advanced (Stage III-IV) Cholangiocarcinoma With or Without FGFR Gene Aberrations 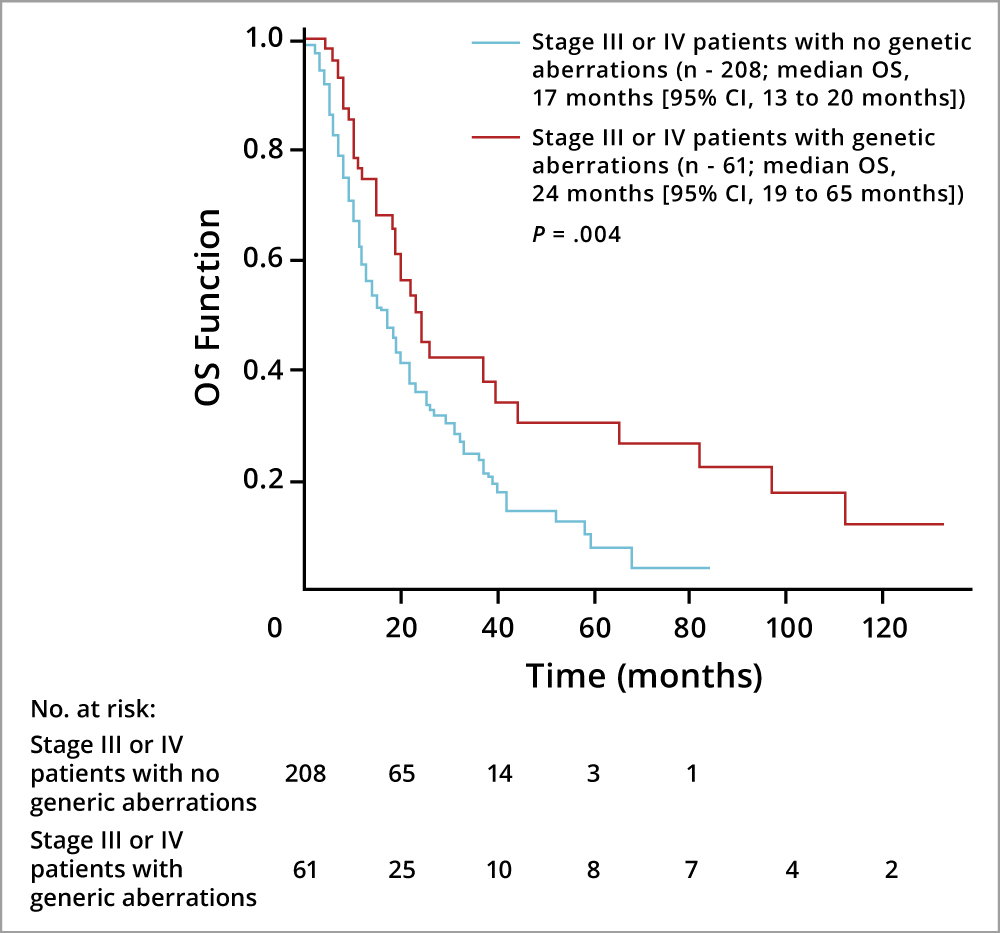 Figure 1B: Impact of FGFR-Targeted Therapy on Overall Survival in Advanced Cholangiocarcinoma 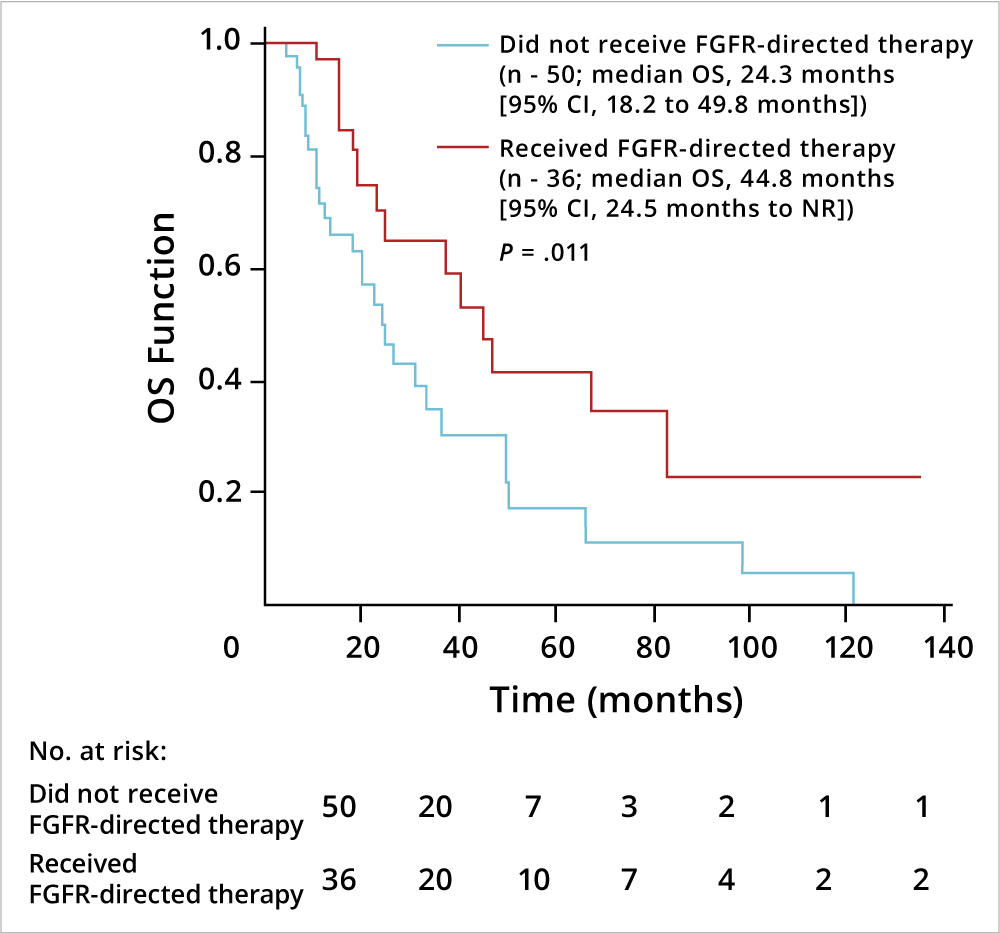 It is challenging to identify patients who could be candidates for FGFR inhibitor therapy, noted Afsaneh Barzi, MD, Associate Professor of Clinical Medicine at Keck School of Medicine of USC. “Oncologists should develop an algorithm for testing, because unless we can identify these patients we are not going to be able to appropriately treat them,” she said. This would include guidance on tissue sampling as well as consideration of clinical characteristics that could enrich the target patient population.

In clinical trials conducted to date, FGFR inhibitors have been generally well tolerated, and adverse effects are considered to be manageable. Class effects seen with most FGFR inhibitors include hyperphosphatemia, fatigue, stomatitis, and diarrhea. These agents can also cause dermatologic toxicities including nail bed changes and trichosis. More rarely, ocular toxicities such as retinopathy have been reported with selected inhibitors.17,18 It should be noted that, apart from class effects, each FGFR inhibitor is associated with a unique adverse event profile. Such differences are due in part to variations in inhibitor specificity for the various FGFR isoforms (eg, FGFR4 inhibition may result in more diarrhea).19 In general, pure FGFR inhibitors produce less off-target toxicities compared with broader VEGFR and multikinase inhibitors, and thus may result in fewer side effects that can reduce patient quality of life.

In general, pure FGFR inhibitors produce less off-target toxicities compared with broader VEGFR and multikinase inhibitors, and thus may result in fewer unnecessary side effects that can reduce patient quality of life.

Provider and patient education are key to ensure early reporting of adverse events and prompt management. “Side effects of agents targeting FGFR are very unique,” said Dr. Barzi. “Most oncologists do not have a lot of experience with hyperphosphatemia, and it is difficult to know whether and how this should be treated.” Development of hyperphosphatemia with FGFR inhibitors might require institution of a low-phosphate diet or use of phosphate binders, while onset of diarrhea may require treatment with anti-diarrheals such as loperamide. Vision changes are possible in some patients, which might necessitate referral to an ophthalmologist for further evaluation. Since FGFR tyrosine kinase inhibitors are administered orally, oncologists should encourage their patients to maintain good adherence once these drugs are marketed and prescribed in order to maximize efficacy.

According to Dr. Barzi, another potential caveat is financial toxicity, so patients should be counseled about this concern if FGFR inhibitor therapy is considered. Nevertheless, as is the case with many novel targeted anticancer agents, treatment with an FGFR inhibitor can be expensive, and cost may be a factor in decision-making for patients and their families.

Preliminary data suggest that de novo or acquired resistance to FGFR inhibitors can occur in some patients, as is seen with other kinase inhibitors. In one study, acquired clinical resistance to infigratinib was reported in three patients with FGFR2 fusion-positive cholangiocarcinoma, due to the development of secondary point mutations in the FGFR2 kinase domain.20 Early detection of such resistance, using genomic sequencing of cell-free circulating tumor DNA, could help guide subsequent treatment decisions. Recent studies also suggest that combinations of FGFR and mTOR inhibitors, or next-generation FGFR inhibitors, could help overcome therapy resistance.21

FGFR alterations are present in a significant proportion of patients with advanced cholangiocarcinoma and have an adverse impact on outcomes. Consequently, oncologists should ensure early, upfront genomic profiling to screen for oncogenic driver mutations, including FGFR alterations, to better assess prognosis and tailor treatment based on specific genetic alterations. “The advent of highly selective FGFR inhibitors has really transformed the trajectory of this cancer,” said Dr. Javle. “Whereas chemotherapy is the current standard of care, such therapy is toxic and provides a limited benefit. With FGFR inhibitors, patients can be spared chemotherapy, and they potentially will have a much better quality of life and lower toxicity.”

Several of these agents have received Orphan Drug designation or approval from the U.S. Food and Drug Administration for treatment of FGFR-altered cholangiocarcinoma. “In the next 2 years,” noted Dr. Javle, “we expect that one or two FGFR inhibitors will be approved, and that will definitely increase therapeutic options for patients.”